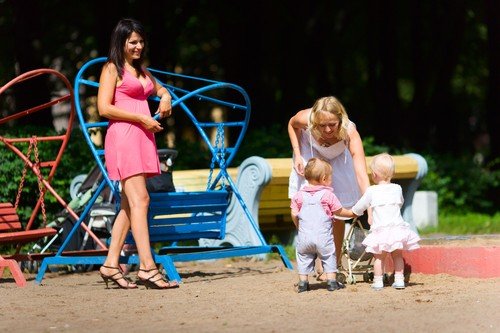 There is a house on the playground. Meter hut on chicken legs. It is always crowded with many children, because inside it is spacious and fabulous: carved windows, a mysterious attic.

Daughter Katyunya immediately rushes there, into the thick of the fun, fearlessly crawling up the stairs.

As a result, I find myself in the epicenter of childhood. I squat in it. Nearby, children of all ages jump – from three years old to elementary school students.

Three boys are eating popcorn at the window, laughing, chatting. Two girls are watching a cartoon on the phone. The kid is playing with dolls. Two more boys fight over the robot. A girl in a funny hat sings a song about clouds. Cacophony…

– What’s on her head? – suddenly asks a boy smeared with ice cream, pointing to Katunya. On her speech processors from a cochlear implant. He ate the treat, but did not wipe his face.

– Those are her ears. Without them, she cannot hear.

She fell ill and lost her hearing due to illness. She was out of luck.

– Hear nothing at all? Even if you yell in your ears?

Why don’t these things fall off your head?

“Because there are magnets sewn under the skin. They are holding.

Did she have surgery?

I notice that everyone is listening to our dialogue. The boys stopped crunching popcorn, the girls turned off the cartoon, no one fights over the robot anymore, and even the song about the clouds – white-maned horses – suddenly ended.

Yes, she had surgery.

Did they cut her head off?

– Well, let’s just say that a special device was implanted under her skin that helps her hear.

Was she in pain?

– During the operation, no. The operation is done under anesthesia, and it does not hurt.

“And they cut out my appendix. I vomited three days after the operation.

– It’s true. The hardest part is getting out of anesthesia. Well, then all sorts of injections. Therefore, it is better not to get sick.

The children are silent. They listen carefully. It’s even embarrassing, like I’ve extinguished the fun, but there is another side.

I am grateful to the children for their directness and honesty.

It’s better than the sidelong glances of adults.

Sometimes I want to approach such an adult and say: do you want me to explain everything to you?

“Will she get it off soon?” asks the boy with the robot.

– Not. This is now forever.

“Forever, forever?” Even when she grows up and becomes an adult?

– Yes. She only takes them off at night. And sleep deaf.

Why film at night? – asks the girl who showed the cartoon on her gadget.

– Well, you’re charging your phone. So her devices need charging. And since she is always in them during the day, she has to charge at night.

– Did she cry? Well, then, after the operation? the girl who sang quietly asks. – After anesthesia?

I don’t want to lie. The children are silent. Look at Katyunia. Sympathize. And suddenly the boy at the window holds out his popcorn to her. And the second. And the third. The third boy touchingly selected the most delicious bursting grains. The singing girl hurriedly takes out a candy from her pocket. Another girl gives the doll. The boy with the robot hands her the robot. Katyunya was taken aback, looking at me.

This is such a touching lesson in kindness that it brings tears to my eyes. Katyunya carefully takes a grain of popcorn and puts it in her mouth.

– Thanks guys. You are all very kind. It’s so cool!

I smile through my tears.

– You know, if she could speak, she would definitely say thank you …