Carol Howarth from the UK parked her car and went shopping. When she returned to the parking lot, she seemed to find herself in a fantastic movie: the trunk of her car was covered with a swarm of bees! 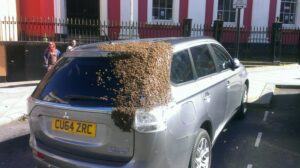 Tom Moses observed what happened: “An unforgettable sight! I was driving by and suddenly I saw a big brown stain on the car, the man said. “People were just stopping to take pictures!” 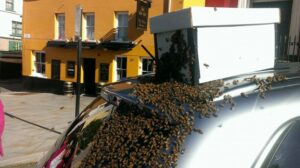 “I was afraid of one thing,” the eyewitness continued. “The car was in front of the bar, and a drunk could get out, throw something at the bees, and then end up in the hospital.” Without thinking twice, Tom called a group of beekeepers who quickly managed to lure the insects into the box. 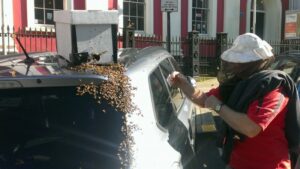 But the clan of bees refused to give up: “The next day, they followed my car to the house! said Carol. The car owner had to call the beekeepers back. 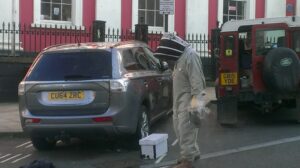 “It turned out that their queen was attracted to something sweet in the trunk, but then she got stuck in it,” explained Roger Burns, one of the beekeepers. “After that, the whole swarm (about 20,000 bees) followed her.”

“Bees always follow their queen, that’s good. Roger continued. “But they didn’t give up, they tried to save her for two days!” Just amazing!”