Our neighbors, the Finns, are of course still artists. You look at a scattering of glowing “flying saucers” in the photo and you think: what’s going on? !

Aliens flew to Earth and started colonizing the planet? ! No way! What you see is a real house, albeit in the form of a flying saucer. But it’s not a barn or a cabin – just to hide from the wind. It’s a real house with a living room, a kitchen, a bedroom, a toilet and even… a fireplace.

These dwellings were called Futuro. They were designed by Finnish architect Matti Suuronen. In 1965, a former classmate asked him to design a ski chalet that could be set up almost anywhere and warmed up quickly. Suuronen studied the question and chose an unexpected shape – an ellipse, as well as new materials for the time: fiberglass and polyurethane. Well, after that, I seriously thought about making houses of a new type. And he did! Futuro houses immediately caught the eye. Well, first of all, the shape. They have been compared to “flying saucers”. At that time, people had just landed on the moon, interest in technology was extremely high, people were flocking to movies for science fiction. But not only in this area. The ellipse house was placed anywhere, even in an open field, even on the shore, and it was stable and well-extinguished gusts of wind. 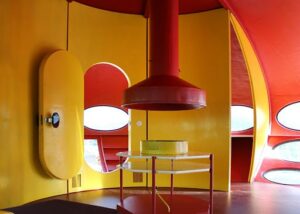 And secondly, the little Futuro turned out to be quite suitable for life. That’s why, within a few months, several dozen companies bought a patent to use the design outside of Finland. The height is 4 meters, the diameter is 8. It doesn’t seem like a lot, but the area turned out to be a good two-room apartment of 50 square meters. The architect immediately decided that Futuro was not a summer cottage, but a house in its own right. Everything needed was there. The heating is electric, in half an hour the accommodation went from minus 20 to plus 15. Inside: a kitchen with a sink, a bathroom with a shower, a small bedroom, but a large living room with plenty of armchairs around the perimeter. Plus a central chimney – where can Finns do without it?! The first Futuro house appeared in the municipality of Hirvensalmi on the shores of Lake Puulavesi – it was bought by a Finnish actor. The neighbors terribly hated the “flying saucer” that landed nearby. Painfully, she looked foreign in rural grace. It should be noted that in other places where the houses of Matti Suuronen were placed, they were received in a hostile manner. There have even been cases of vandalism. But on the other hand, Futuro attracted wide attention at all exhibitions, a lot was written about it. Within a few years, more than 100 such houses were installed around the world. 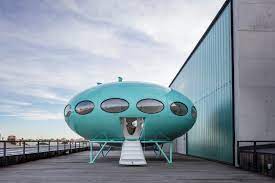 Yes, they were embarrassing in form, but otherwise they were solid assets. Made of lightweight and durable plastic, less than 20 blocks, assembled like a designer in two days, weighs 4 tons and, if desired, can be transported unassembled on a truck or even transported by helicopter. You can place Futuro anywhere, the main thing is to fix the base with concrete platforms. 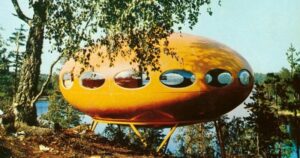 So why did Suuronen’s business close and why did he end his days as a tramp? It’s simple: in 1973, the oil crisis broke out and the prices of the materials used for Futuro jumped dramatically. . They stopped buying houses. Today, there are 60 “flying saucers” left in the world. Some are in a museum (like the WeeGee exhibition center in Espoo), others have become playgrounds or even part of a nightclub.