The Swiss village of Albinen is a real mountain pearl located in the canton of Valais at an altitude of 1 km 300 m above the valley where the river Rhone flows, the source of which is in the glacier of this Cato.

Great views, mountain air! However, even such fabulous places suffer from the fact that people leave them. About 13 years ago, the school was closed here, because there are so few children left! Now the little inhabitants of Albinen are taken by bus to the neighboring one, and if that one is closed?

In 2017, the municipality of the village came up with an idea: to offer people a monetary reward for agreeing to move to live in Albinen. Adult – 25 thousand Swiss francs, for each child another 10 thousand. 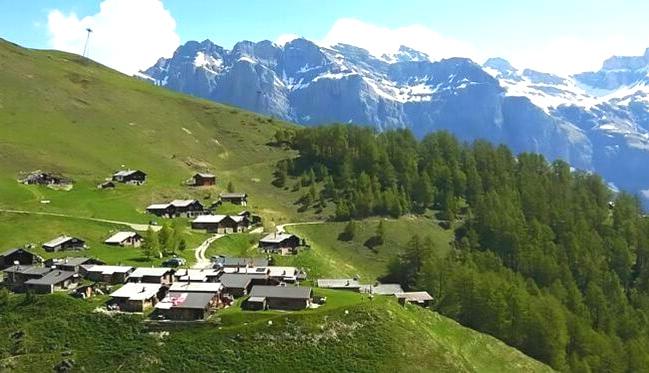 Thus, the average family (parents +2 children) may well count on an allowance of 70 thousand francs. The excitement on the Internet rose incredible, everyone was waiting: whether or not the villagers would accept such a plan for its revival.

At the end of the year, the inhabitants of the village voted for this project, and it was known all over the world. Foreigners with suitcases were drawn to the Swiss village. Perhaps the Albinen authorities themselves did not expect such an avalanche of applications. At the same time, we decided to support those who remained, they were also given the opportunity to participate in the competition. How is the competition? – you ask.

But like this. Of course there was and continues selection. Freeloaders are not needed anywhere, “even” in Switzerland. Therefore, we carefully study who can qualify for cash benefits by living or re-settling among the mountain beauties:

Swiss citizen (passport or permanent residence permit) under 45 years of age;
People who have committed themselves to live in Albinen for less than 10 years, otherwise they will have to return the money.
The settler undertakes to invest in housing in the village (construction, purchase, repair of the existing one) 200 thousand Swiss francs.
So the conditions, as you can see, are not easy. But a little more than a year later, they were completed by a family with two children from the canton of Aargau and a local resident who started renovating his house in Albinen.

Let’s note one more point: the budget of the project is 100 thousand Swiss francs per year. So in the next five years, the population of Albinen will be able to grow by about 5-10 families. Mayor Beat Yost is pleased. Not immediately, but the village will be reborn!