When the baby only knows his father with a beard, then, seeing him clean-shaven for the first time, the child may be shocked, may cry and even begin to resent him. But all this certainly does not apply to Ellie, who has long since become popular on the Internet!

Although she asked her father to “remove” his beard, she was completely shocked when he later revealed that he granted her request. It turns out that the girl completely forgot that this conversation took place, informs Ukr.Media. 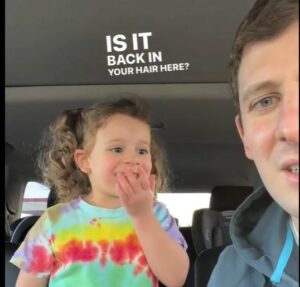 It is at this stage that you can expect things to go wrong and the baby will most likely start to get cranky. But instead of crying or staring in disbelief, sweet Ellie slowly started to get used to Dad’s new look.

Along with asking lots of silly questions only an innocent little kid could think of, she gently touched his face after making sure to give him a few compliments, calling Dad “cute” and even “handsome.” So despite the rocky start, it’s safe to say that Ellie’s new dad look is approved!

Watch the little girl’s reaction to her father’s lack of a beard in the video below: it’s so cute!