In the UK, a mother has given birth to identical twins. The brothers seem to belong to two different races. One son looked like his light-skinned mother, and the other looked like his dark-skinned father, Ukr.Media informs.

Jade Ball from Salford, Britain has become the mother of twins – Clay and Cole. Clay was born with blue eyes, fair hair and skin, while Cole was born with brown eyes, brown hair and dark skin. Different twins resulted from mixing the two races of the parents. The father is of Jamaican descent, while the mother is light-skinned British. The happy parents already have an eldest son, Cruz, who inherited dark skin. “When we found out we were going to have twins, we didn’t really think about what they would look like. I think we just assumed they would both be dark, a mix of me and their dad, and look like their older brother Cruz, who is two now,” Jade said. 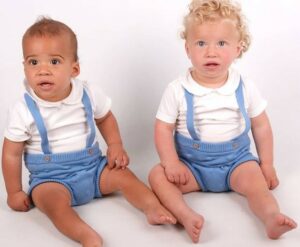 Passers-by periodically stop and ask what Clay and Cole are called. Strangers are surprised that the boys are not just brothers, but twins.

“When we meet new people, they never believe me that Clay and Cole are twins. They think I’m making fun of them.”

The twins not only have a different appearance, but also a character.

“Clay is a leader. He is confident, mischievous about everything. Cole is a bit more reserved than Clay, he likes to dance around the house, but he also likes to cuddle with me,” mum said. It’s fascinating and shows how crazy genes are. In fact, they don’t look native at all. They are so different, but just as beautiful.