St. Pancras International station in London, where thousands of passengers pass through daily, has a single piano in its busiest section. Anyone can play it. Many try to entertain passing passengers, but not all are as talented as a little boy who decides to impress the crowd.

As the boy sat down at the piano, a man called out to him. He smiled and asked the boy to play the legendary Queen song “Bohemian Rhapsody”. However, the fact is that this composition is very complex. Even professional pianists often find this difficult. 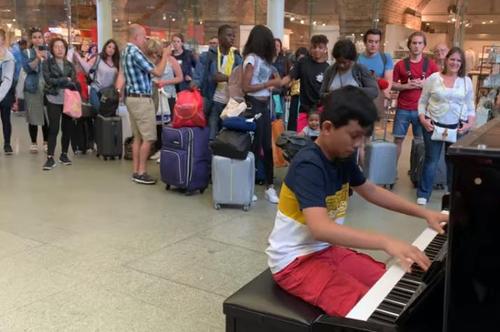 What happened next shocked everyone. Fortunately, it was filmed. The boy started playing a well-known melody, but he didn’t even look at the notes. He played so skillfully that when you close your eyes you might think an experienced adult musician is sitting at the piano.

It was clear to anyone who passed by that the boy put his soul into his game. He closed his eyes and immersed himself in the melody with his whole body, and a crowd of onlookers gathered around him. The man who asked to play this song was deeply touched.

Fortunately, the video of this performance was uploaded to the Internet by the pianist himself. That little pianist turned out to be 12-year-old Cole Lam, who often performs in public. He is not only a musician, but also a singer and a composer.

This story had an interesting twist. Cole was already planning to play Bohemian Rhapsody before the man asked him.

The piano at this station was a gift from Sir Elton John.