Interest clubs, online dating, chats – which is not invented in the world to allow lonely hearts to find each other. It turns out that there is another original way to get acquainted with the soul mate – to write a letter by post and send it to Germany at the postal address of the Tree of Love.

For several decades, postmen have regularly sent messages down the hollow of an oak tree, and anyone can respond by choosing a contact person. 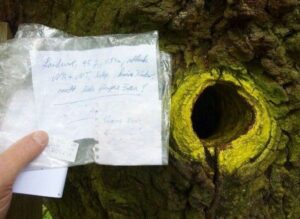 German oak is a true long-liver. It is over 500 years old and its history is full of legends and romantic adventures. More than a century ago, this tree saved the love of Miss Orth, the daughter of a local forester, and Mr. Schutte-Falshe. Young people were forbidden to meet, according to the girl’s father, the union was dysfunctional. True, the lovers decided to go against the parental ban, exchanged letters in secret, building a hiding place in the hollow of this tree. When it became clear that this couple’s love was stronger than prejudice, they were allowed to marry. The wedding ceremony took place near the Savior Oak on June 2, 1891. 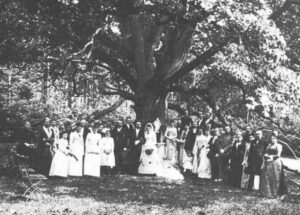 Wedding ceremony near the Tree of Love

This story quickly spread to nearby settlements, and young people began to come to the oak tree to also drop a note in hopes of finding their destiny. From 1927, it became obvious: it was time to assign a postal address to the oak tree, the flow of letters became too great, and the geography of those who wished to write widened considerably. 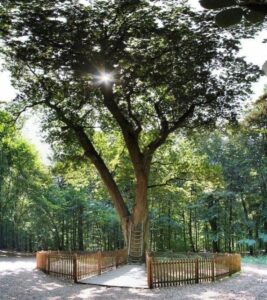 Thanks to the oak, more than 100 love unions have been concluded

The hollow is located at the level of three meters from the ground, a wooden staircase leads to it. The hollow serves as an open mailbox, everyone who comes here can receive and reply to any letter. At least 40 letters still arrive at the oak address per week. Interestingly, over the years, about a hundred couples have formed in such an original way, and many friendly correspondences have also begun. One of the postmen who worked on the site for more than 20 years says he also found his wife thanks to the letter.

A wooden staircase goes up to the hollow