Many tourists travel to other countries not only to relax, but also to tap into their knowledge and admire the majestic sights. Architecture is just one of those areas that attract the attention of visitors. Modern masters around the world continue to implement the most incredible ideas.

Today we will show some of them, reports NUR.KZ. Burj Khalifa The tallest skyscraper in the world is located in Dubai (UAE). It was built in 2010. The height of this impressive super tower is 828 meters. It has 162 floors and 180 meters of drop on the longest spire on the planet. The Burj Khalifa is shaped like a stalagmite of steel and glass. Inside there are apartments, a hotel, offices and shopping malls 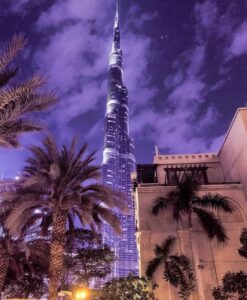 Artificial supertrees were installed in Singapore in 2012. They are planted with real ferns, orchids, grapes and other plants. The structures were equipped with light elements that generate solar energy. In addition, the tropical park, known for its futuristic landscapes, has greenhouse complexes and flower domes with exotic plants from around the world. 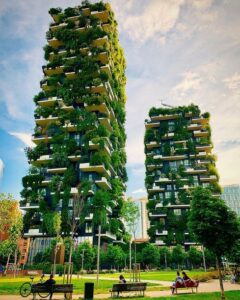 Since we touched on the topic of plants, it is necessary to recall the skyscrapers in Milan, Italy, built in 2014. The residential complex consists of two towers 110 and 76 meters high. Around 900 trees, 5,000 shrubs and 11,000 beds of perennials have been planted on the terraces around the buildings. Architectural objects not only decorate the cityscape, but also help to filter the air of carbon dioxide. Electricity is generated here from solar panels. 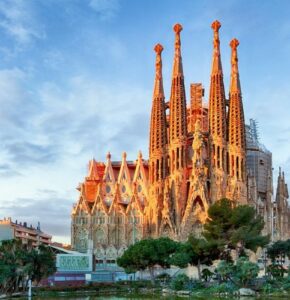 Temple in Barcelona, ​​the main idea of ​​the architect Antonio Gaudi, one of the most famous long-term constructions in the world. The building began to be erected in 1882 and it was not until 2010 that it was officially inaugurated. The facades and towers are decorated with sculptures.

Absolute World The Absolute World resort was built in 2012 in Mississauga, Canada. It consists of five buildings, two of which stand out from the landscape. The height of the first tower is 170 meters (56 floors), the second 150 meters (50 floors). They were built in such a way that in both residential skyscrapers there is not a single absolutely identical floor or balcony. Because of this, the buildings seem to rotate around their axis. The “twist” of the buildings blends well with the surrounding landscapes. 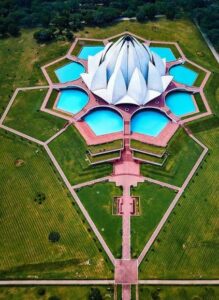 Lotus Temple The main temple of the Baha’i religion in India and neighboring countries, built in 1986. It is located in New Delhi and is the main attraction of the capital. The building consists of 27 “petals” lined with marble brought from the Greek mountain Penteli. Architect Fariborz Sahba brought his idea to life, inspired by the famous Sydney Opera House. 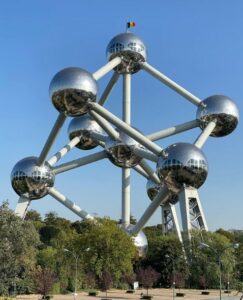 Atomium The Atomium is one of the main attractions and symbol of Brussels, Belgium. It was designed for the opening of the 1958 World’s Fair by architect Andre Waterkeyn as a symbol of the peaceful use of atomic energy. The steel and aluminum model may first appear as a decorative sculpture. However, in reality, the Atomium is a huge building with a restaurant, museum, and viewing platforms. You can climb here on escalators in the connecting pipes between the balls.