Every girl, planning a wedding celebration, first thinks about the dress she will wear. We need such an outfit in which the bride will not only look stunning, but will become the norm. Celebrities can boast of such outfits. We invite you to discover which are the most beautiful wedding dresses worn by world celebrities. Any girl from early childhood imagines what a beautiful dress she will wear on the most important day of her life – her wedding day. This ideal changes with age: lush royal volumes give way to elegance and sophistication of silhouette, lush ruffles and drapes give way to exquisite embroidery.

When it comes to the wedding, the question of the dress becomes a burning question. Then the bridesmaids turn to fashion magazines, catwalks, carefully study the world of bridal fashion. To simplify this process, we recommend looking at reference wedding dresses, which famous actresses, singers, princesses, duchesses once flaunted. Their wedding dresses are an example of luxury, refinement of taste, elegance and femininity. Perhaps some details will appeal to future brides, they will help you choose a style or decoration. So, we invite you to discover what are the most beautiful dresses worn by celebrities as they walk down the aisle: 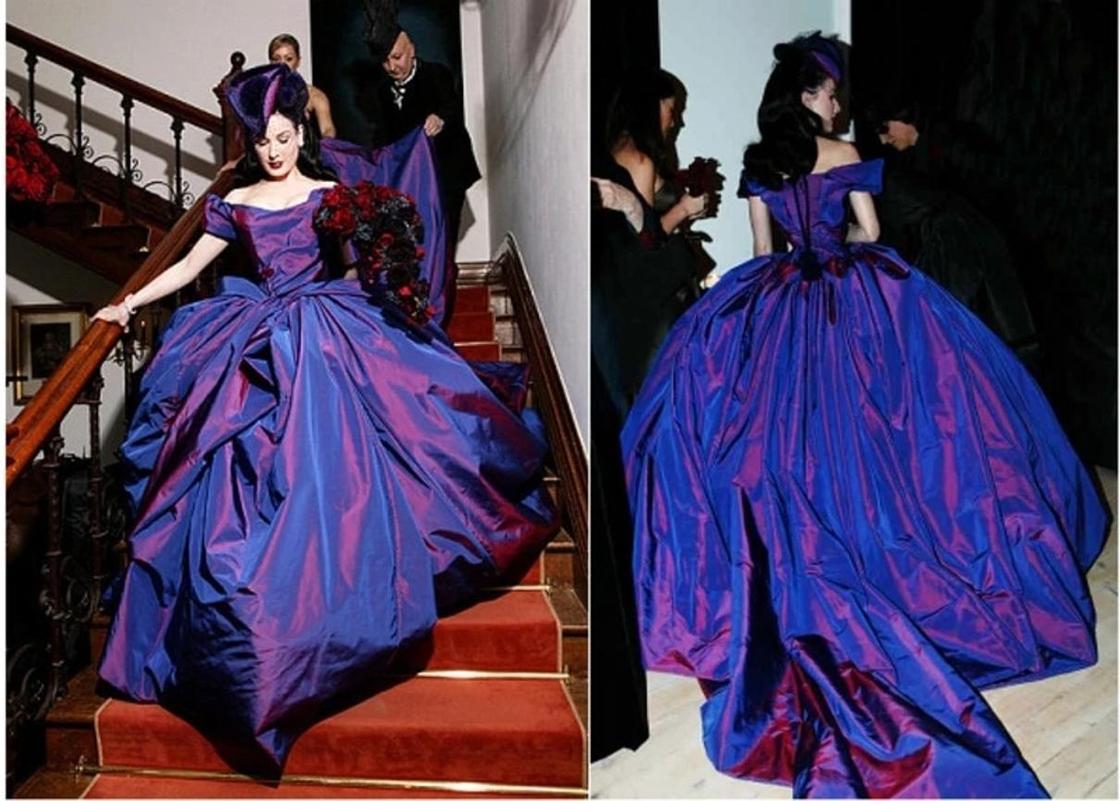 We suggest starting a review of star wedding dresses with an exotic, non-standard solution, which was demonstrated by dancer and designer Dita Von Teese in 2005, when she married Marilyn Manson. She went against the tradition of the wedding attire color palette. Wedding dresses are traditionally perceived exclusively in a palette of light shades: white, ivory, pink or tinged with blue. However, not purple. It was Dita Von Teese’s chic dress. The outfit was created by Mark Pullen – a fan of the corset. Therefore, Dita’s thinnest waist (50 cm) was chained in a tight corset, which tore off the shoulders and cleavage. The pale and delicate skin of the bride was in perfect harmony with the purple reflections of the fabric from which the dress was made. This gave a gothic look to her image. 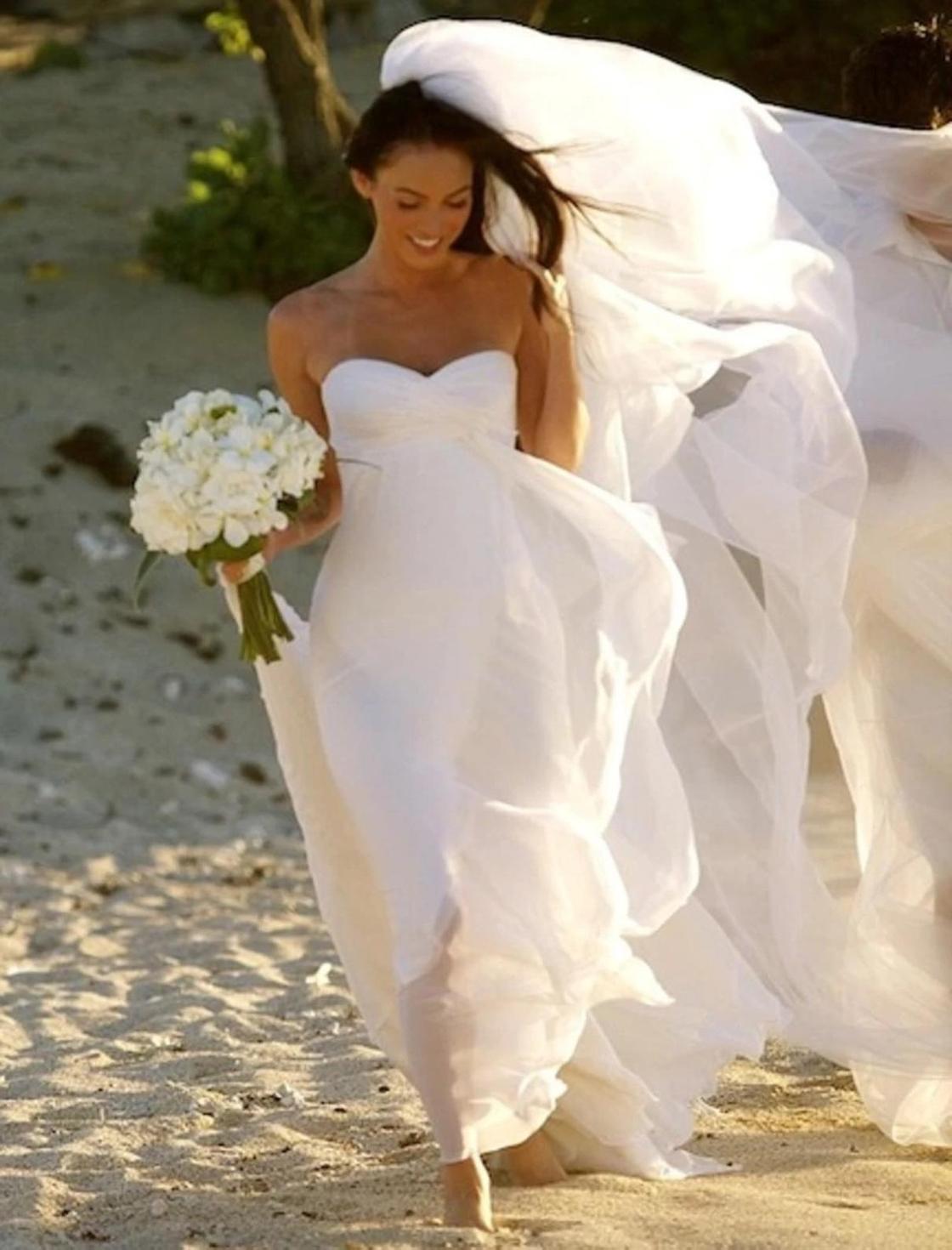 In 2010, the American actress married actor Brian Austin Green. The celebration took place in Hawaii. The young people exchanged wedding rings in a romantic setting, on the ocean. Megan, despite her scandalous notoriety, was dressed in a beautiful feminine wedding dress. She wore a snow-white dress designed by Giorgio Armani. The dress is an example of sophisticated sophistication and femininity. The designer opted for the Greek style. The draped neckline emphasized Megan’s charms. The open top made Megan Fox’s neck and drop shoulders more expressive. The hemline, falling freely in pleats, floated beautifully in the ocean breeze, making the actress’s long, slender legs expressive. Despite the fact that the dress is not decorated, it looks beautiful. 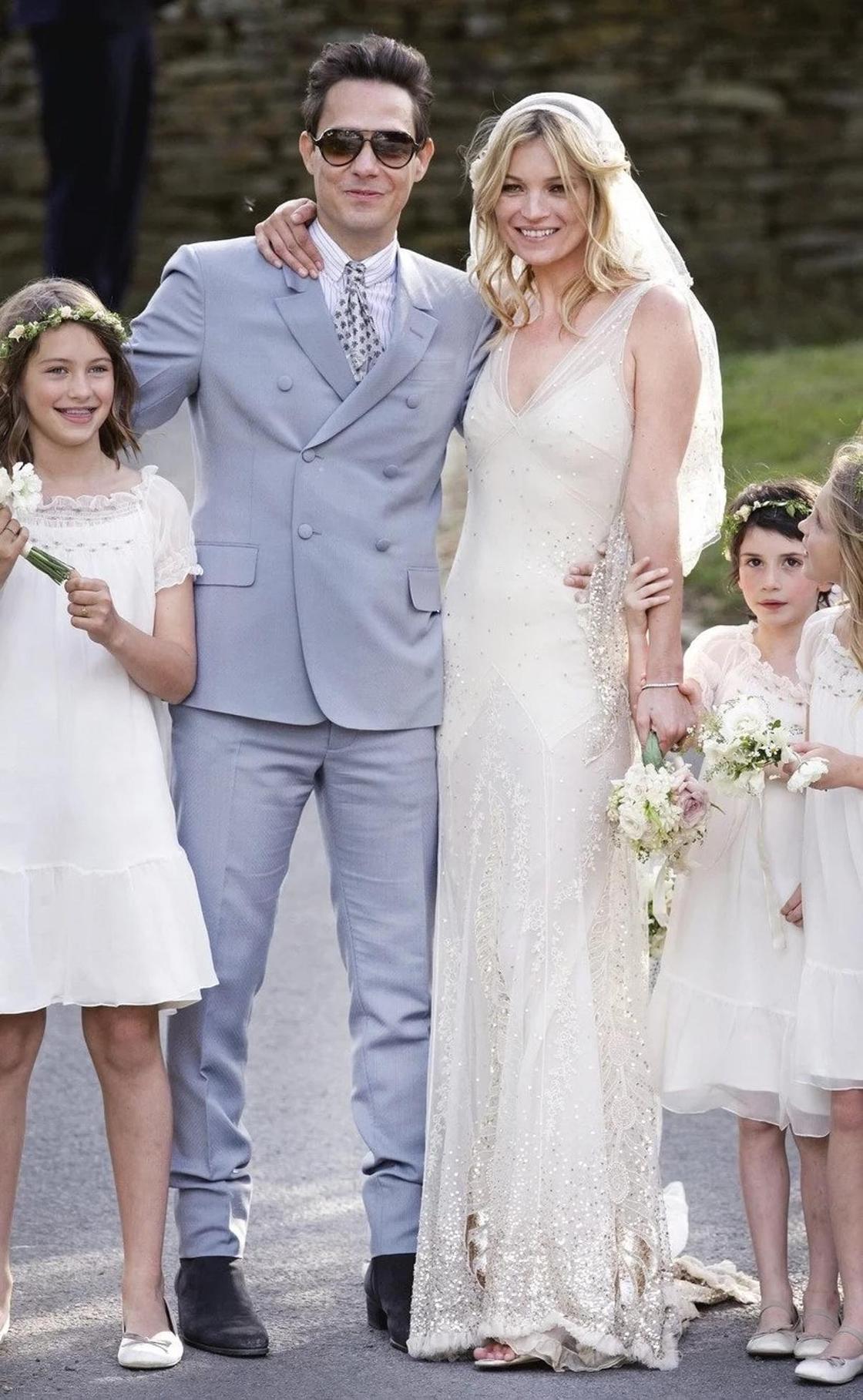 After accepting rock guitarist Jamie Hince’s offer, the British model didn’t think long about who to order a wedding dress from. The choice was clear – John Galliano. Despite the fact that in 2011 the artistic director of the fashion house Christian Dior fell out of favor because of his politically incorrect statements, his close friend Kate Moss was not afraid of condemnation and tried to bring back the designer in the business by placing an order for a wedding dress. It came out incredibly beautiful and stylish. The fashion designer proposed a simple silhouette, a falling skirt in delicate, light and translucent fabric, open shoulders and a V-neckline. All the beauty was in the decoration: hand embroidery, golden sequins and pearls. This outfit is reminiscent of chic 1920s-style dresses, which is no surprise, since Kate Moss is a well-known lover of vintage style in clothing. 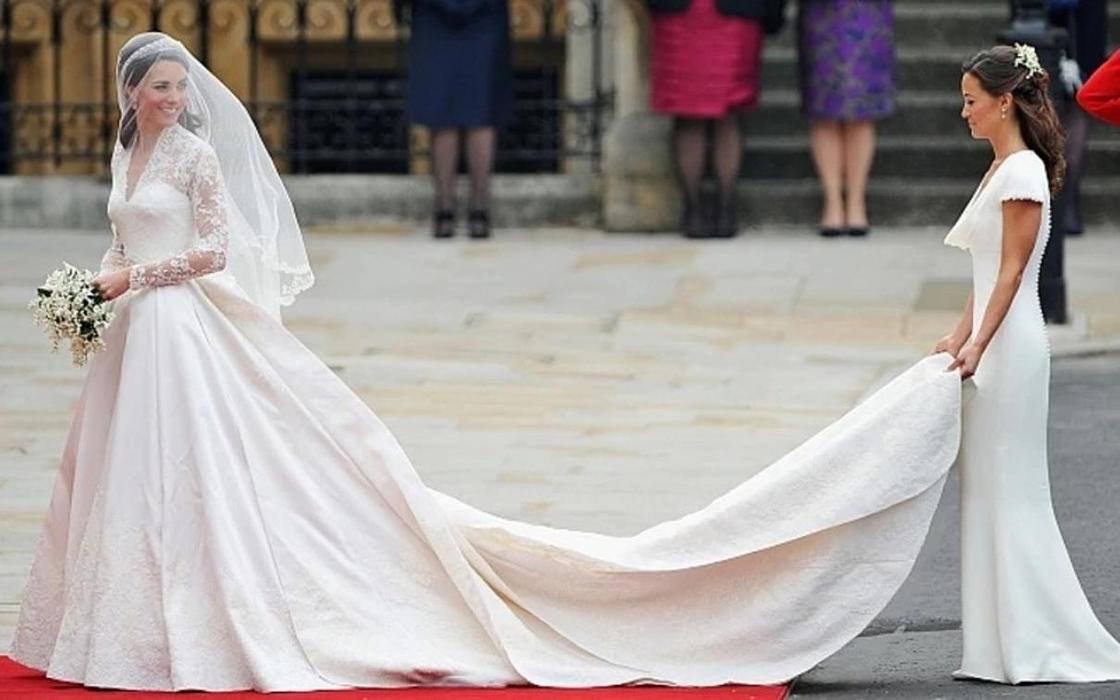 The most beautiful wedding dresses, of course, you will find in future queens. The dress worn on April 29, 2011 by Kate Middleton was voted one of the most beautiful outfits. It has long since become the benchmark for luxury, style and elegance. Its designer Sarah Burton, creator of the fashion brand Alexander McQueen, took into account all the requirements of the royal house. The dress was made with respect for the most important English traditions. For Kate Middleton, a classic A-line style was chosen: closed arms, a clearly defined waist, a stand-up collar and a fluffy skirt. The sleeves and neckline were decorated with lace, which craftswomen embroidered by hand. It depicts daffodils, clovers, thistles and roses – the symbols of the British royal house. The dress was closed in the back with 58 small buttons. The image of the wedding of the Duchess of Cambridge was completed with a long train. It didn’t break Princess Diana’s dress train record (8m), but it was very long. This dress is made of fabrics of two shades – white and ivory, equipped with a corset and a bustle, which gave volume to the hips of the princess. 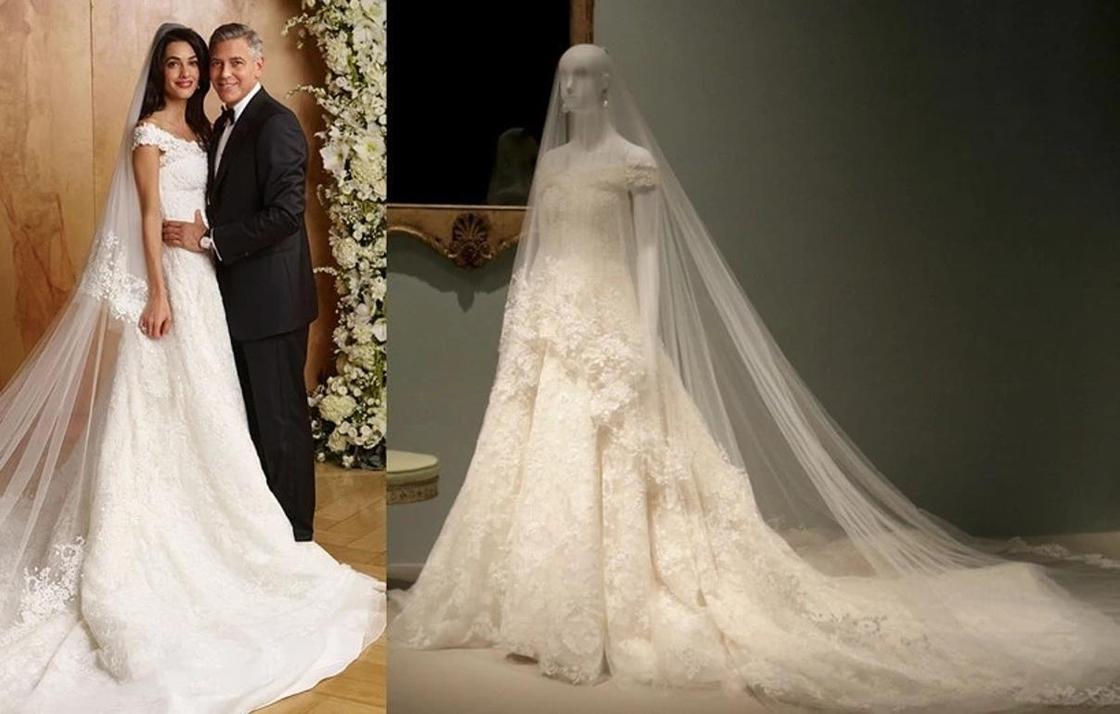 One of the most beautiful dresses of 2014 was that of British lawyer, Lebanese Amalie Alamuddin, who became the wife of American actor George Clooney. The woman wore a luxurious and elegant outfit created by designer Oscar de la Renta. The dress is made of lace fabric. The fashion designer chose the classic version A silhouette with dropped sleeves. For the implementation of the sketch, a cream-colored fabric was chosen. The image was completed with a long train created from a combination of lace and tulle. It is embroidered with pearls and crystals. This outfit is recognized as the most sophisticated and elegant, which is why the Museum of Fine Arts bought it as an exhibit for the exhibition of the achievements of modern fashion.

In 2015, American actress, model and TV presenter Sofia Vergara married actor and philanthropist Joe Manganiello. Those present at the festival were impressed by the bride’s wedding dress. And there was something to be surprised about: the outfit was created in the Baroque style – the dress was lush and richly decorated. Designer Zuhair Murad performed miracles of skill, as Sofia had never tried on a dress before the wedding. The fashion designer sewed it according to the measurements he took from the girl. The dress has a mermaid silhouette with a detachable train. Over three hundred beads and rhinestones were used for the embroidery. More than 1500 hours have been spent on hand embroidery. Pippa Middleton In 2017, Kate Middleton’s younger sister walked down the aisle. The girl’s dress was designed by Stephen Jonze. This wedding dress was recognized as the most beautiful wedding dress of the year. Pippa opted for the same A-line silhouette as the Duchess of Cambridge, complete with a luxe skirt and skin-tight corset. However, unlike her older sister, she preferred short sleeves and a closed neckline with a stand-up collar. The dress is made of soft, flowing fabrics, which are hand-embroidered with lace. He has become the embodiment of elegance and tenderness. Meghan Markle 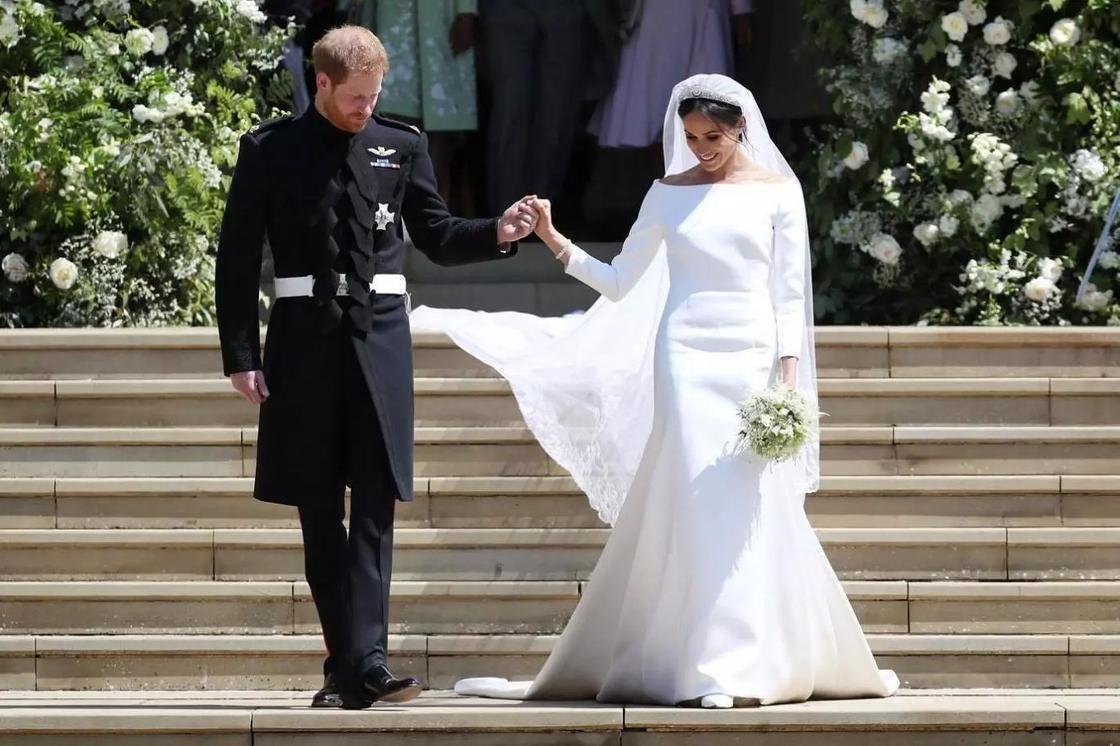 The 2018 wedding dresses worn by celebrities did not arouse much admiration from the public. Opinions also differed regarding Meghan Markle’s wedding dress, whose wedding to Prince Harry became the star event of 2018. For many, it looked fresh, loose and rustic. Others have noted the sophistication, elegance and delicate taste of the Duchess of Sussex. She chose a dress according to the figure, without fluffy skirts, ruffles and excessive decor. The boat neckline beautifully accentuated Megan’s slender neck and grace, and the silhouette accentuated her slender waist. The hem of the dress flares out and ends with a soft triple organza lining. The ¾ sleeves show off the woman’s sculpted arms. This outfit was designed by Clare Waight Keller, chief designer of British fashion house Givenchy. Especially for Markle’s dress, the fashion designer developed a special type of fabric – cady silk. Its characteristic is a soft matte shine. A five-meter veil, on which 53 symbols of the British Commonwealth are embroidered, became a special decoration and addition to the dress. It was a kind of diplomatic gesture on the part of the new member of the British crown: Meghan Markle thus underlined how important the problems of the royal family are for her. The outfits of celebrities, in which they walk down the aisle, surprise and amaze with originality and beauty, grace and courage. Rich and luxurious outfits become the standard of bridal fashion and even end up in museums. Take a look, maybe you will put some ideas into use